As you may know, with all the “buzz” going on in the “blogosphere” and the “Twitterverse” and “FacebookLand,” I’m going to be doing a stand-up comedy show on March 9 at the Des Moines Social Club. Along with Omaha comedian Zach Peterson. Tickets are ON SALE NOW.

Ever since I announced this comedy show, I’ve been getting a lot of questions from people. Questions like:

“Are you sure you want to do this?”

“Why are you doing this to yourself?”

“You should probably see someone about your emotional issues.” (OK, that last one isn’t a question.)

So I gave it some thought. Here are the top 5 reasons why I’m doing stand-up comedy:

Because I probably need therapy, but my insurance won’t cover it:

I’m prone to melancholia, anxiety and curmudgeon-hood, but nothing makes me happier than making people laugh. Some of my favorite memories in life are the times where I got to be part of a room full of people laughing. There’s nothing else like it. It’s such a rush. It gives me endorphins like no legal drugs possibly could.

As a freelance writer, I spend a lot of time sitting at home by myself wearing pajamas (some days I go the extra mile and wear pants) and I don’t get to talk to other people very often. So rather than take the smaller step of joining a co-working space or hanging out at a coffee shop, I’d rather go all-in and tell jokes to over 100 people. (Right? There will be at least 100 people at this show, right everybody? Please come to my show. I need this. You have no idea how much I need this.)

It’s just something I need to do. The idea came into my head like a miniature meteorite plummeting out of the sky and bonking me in the brain: “You should do stand-up comedy.” I want to do stand-up comedy for the same reason Sir Edmund Hillary wanted to climb Mount Everest: “Because it’s there – and because I need to get out of the house and spend some time away from my wife and kids.”

Because I want to make memories:

As a father of two small children, I spend a lot of time contemplating my own eventual death. Time just keeps speeding up on me, and before long I’m going to start rapidly aging and deteriorating and collapsing into dust like the guy at the end of “Indiana Jones and the Last Crusade” who chose the wrong chalice to drink from. 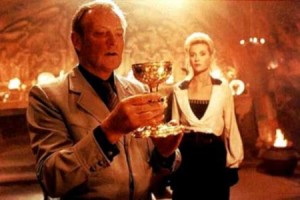 Remember that scene? The guy who thought he was drinking from the Holy Grail and would be rewarded with Eternal Life, but then it turns out he quickly disintegrated into a pile of bones?

I’ve never seen such an accurate onscreen depiction of the aging process. 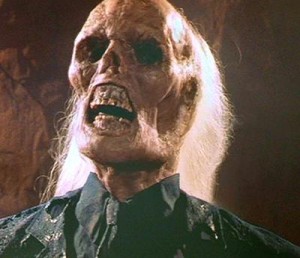 So before long, that’s going to be me. And before I die, I want to make some more memories from doing the things I love best. Someday when I’m on my deathbed, some of my fondest memories will be the times when I got to perform, make people laugh, make people think, and bask in the adulation of an audience.

Is this attitude entirely emotionally healthy? No. But that’s who I am.

Because I just don’t give a damn anymore:

Being a stand-up comedian can be tough. People might not laugh. They might heckle me. They might be offended by my jokes, throw garbage at me or threaten me with bodily harm. At this point, I don’t care. I’m 32 years old, I’m a grown man, and I don’t have, need or want a regular job anymore so I don’t have to worry about the Corporate Thought Police judging me for the things I say onstage.

So if you’re reading this, and you’re going to be within driving distance of the Des Moines Social Club on March 9, please BUY TICKETS and come to my stand-up comedy show. I promise not to collapse into dust until after the show is over.

Want to buy tickets? Now you can:

You’ve got questions? We’ve got answers:

How much do tickets cost? Only $10! It’s a cheap night out! And much more fun than your typical overrated Hollywood blockbuster. Plus there’s a small processing fee that goes to benefit the Social Club (a goodhearted non-profit that supports the local cultural scene, NOT an evil corporation like Ticketmaster). Only 150 tickets are available. Get ’em before the show sells out!

How do I pick up my tickets? There are two options: the tickets can be sent to you via U.S. mail for a small additional postage fee, or you can pick up your tickets at the Des Moines Social Club Will Call window. Sorry, but there is no “print at home” option.

Can we bring our kids to the show? Probably not. The show is officially designated as age 18+ and there will be frank discussions of adult topics. And probably some use of profanity. It’s going to be kind of like a really profane R-rated movie, like Harold & Kumar but without the nudity. If parents have questions about whether the show is appropriate for your high-school age kids, please contact Ben Gran at benjamin.gran@gmail.com

Where’s the booze? Alcoholic beverages can be purchased in the Kirkwood Lounge bar. We will be checking IDs. 21 and over only, please.

What makes Ben Gran think he has any right to do stand-up comedy? Ben Gran is an experienced comedy performer, script and sketch writer. He has performed sketch and improv comedy and acted in plays, but decided to do stand-up because he was tired of other people getting to say all the lines. (Ben is what psychologists refer to as a “pathological narcissist.”)

Why should we trust Ben Gran to make us laugh? What if he sucks? Friend me on Facebook to see my best material. Many people tell me that my Facebook jokes are the sole reason they log into Facebook each day. (Not to brag.)

Who is Zach Peterson? Zach Peterson is hilarious! I saw him open for the great Rob Delaney at a comedy show in Omaha, and I was like, “This guy is good. Now I need to con him into performing at my stand-up show in Des Moines!” Here’s a video of Zach Peterson opening for Rob Delaney in Omaha:

Do you have any other questions? Send them to me: benjamin.gran@gmail.com

Please come to the show. Otherwise it will just be me, talking to myself in an empty bar. In other words: a typical Friday night.

Want to laugh at Ben Gran in public? 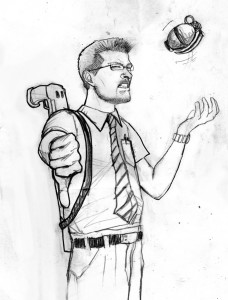 WHERE: The Des Moines Social Club!

WHO: Ben Gran! Also: A funny guy from Omaha named Zach Peterson will be on hand to deliver devastating witticisms! (You might say Zach puts the “Ha!” in “Omaha!”)

WHY: Because we need something special to get through the gray slog of our daily lives, but drugs are illegal.

P.S. Are you wondering, “Who is this guy? How dare he perform stand-up comedy?” Connect with me on Facebook: https://www.facebook.com/benjamin.gran