Several years ago, before we had kids, my wife and I made a terrible mistake and decided to adopt a dog.

It was a Labrador retriever, big and yellow, over 100 pounds. We adopted the dog sight-unseen from some friends of friends who were looking to find him a new home. His name was “Bo.” We drove 2 hours to Southwest Iowa to meet Bo’s soon-to-be-former owners, picked up Bo and drove him back to our house. 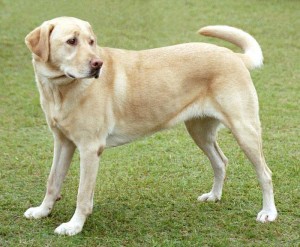 We don't have any pictures of Bo. This is not the actual dog.

I really don’t know what we were thinking. This was back in the days before we had kids and we had no other responsibilities or worries in life. We thought we wanted a Lab. They were the most popular breed in America – known for intelligence, loyalty and athleticism. We had visions of jogging with our dog, walking with our dog, playing fetch off a dock while the dog happily plunged into the frigid lake, again and again.

Unfortunately, we quickly realized that Bo was going to present a bit of a change to our otherwise orderly, happy lifestyle, starting on the first night at our house when he compulsively chewed through all of his toys.

“That’s strange,” I said as Bo chowed down on another stuffed animal. “He sure seems to like chewing!” Little did we realize, until it was too late, that Bo was expressing stress and anxiety by gnawing everything he could get his paws around. Pillows, ropes, frisbees, and stuffed animals all got shredded into an indistinguishable mass.

Bo was a very anxious dog. He was constantly chewing and licking and smacking. I don’t blame him, really. After all, the only owners he’d ever known had just given him away to a couple of strangers. This is one of the things that annoys me about dogs – their neuroses.

Bo needed a lot of attention. He needed daily walks. He needed lots of things that we couldn’t give him because we were too busy and self-absorbed. We worked long hours and left him in the house alone all day. We’d let him out to go pee and poop in our tiny urban backyard, but then he’d chase squirrels across the street and get lost and run onto the neighbors’ front porches. We were constantly chasing him around the neighborhood and cursing the fact that our small lot didn’t have a fully-fenced backyard.

We would have given him more attention, but our personalities just weren’t the right fit. He was a friendly dog, but he was overbearing and off-putting, like a guy at a party that you can’t wait to stop talking with. Even though his constantly wagging tail was as powerful and painful as a baseball bat, he was kind of a wuss, really. Whenever we gave a command to “come inside” or “stop destroying the neighbor kid’s toys,” he would slump his shoulders and skulk around and defy us, quietly, in a passive aggressive fashion.

I was so disappointed. I figure, as long as you’re going to have a dog that’s destructive, messy and painful, he might as well be a stronger personality, more of an Alpha Dog, you know? Take my parents’ dog, Milo, for example. He’s a total jerk, but we love him for it. He’s the dog you love to hate.

And he shed EVERYWHERE. All of our clothes, furniture and rugs were soon coated with dog hair. Dog hair blew threw our house like tumbleweeds. We were idiots. We never should have gotten a dog that shed so much. My wife quickly noticed that she was sniffling, sneezing and having sore throats all the time, and we realized that she was allergic to the dog.

Bo was too neurotic to eat dinner in the basement, so we had to move his (HUGE) food and water dish up to our tiny 1920s-era kitchen, where it took up precious floor space. He was too neurotic to eat by himself, so we had to be near him while he ate, or else he wouldn’t eat at all and would later vomit all over the floor. He vomited all over our living room rug and ruined it. We ended up donating it to the animal shelter.

As you might imagine, a 100 pound dog creates a lot of poop. Our yard was soon covered with little piles, scattered about like monuments. I scooped poop as often as the winter weather would permit, but I still couldn’t keep up with the supply. We couldn’t walk him as often as he needed because we were too lazy and couldn’t wake up early enough to walk him before we left for work. (Again – we were idiots. I don’t know what we were thinking. We never should have gotten this dog. Or any dog.)

And whenever we did take him for a walk, it was no fun because he was constantly straining on the leash, wouldn’t listen to instructions, and wouldn’t do what we needed him to do. (My mom has to have rotator cuff surgery because her dog Milo pulled her to the ground during a walk. That’s right – she has a “dog-related injury.” Why do people put themselves through all this dog crap? How desperate are we for companionship?)

It all would have been worth it if we really loved this dog and wanted him in our lives. But the truth was, we just weren’t that into Bo. Eventually we realized that the personal chemistry wasn’t there. So 4 months after we brought Bo home, we decided to take him to the pound and had him euthanized.

No, just kidding – ha ha! We were lousy dog owners, but we’re not monsters.

No seriously – I know that dogs getting put to sleep due to lack of shelter space is a big tragedy, and I don’t mean to make light of it. I was just trying to see if you were still paying attention.

We didn’t have him euthanized. Seriously, I swear. Instead, we found him a new home. With a family in the country that had a pond in the backyard. The father of the family loved to go fishing and hunting, and wanted a dog to go fishing and hunting with. They had 2 young kids who wanted a pet. The whole thing worked out perfectly in the end. Bo happily climbed into the car with his new owner and rode out of our lives, and we were all better off as a result.

Unfortunately, now we have kids, and both of our kids love dogs. So it’s probably just a matter of time before we have to get one. It won’t be another Lab, or any other dog that sheds. It would have to be something hypoallergenic, housebroken and easy to live with, that requires no outdoor exercise and minimal involvement on my part.

Ideally, my next dog will be a really smart, hairless cat.