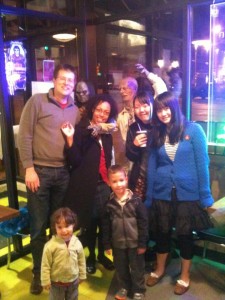 Our family with Sakura and Mafuyu - at Zombie Burger

This past week we hosted two high school students from Japan who are here in Des Moines on a sister state program from Yamanashi prefecture – their entire homeroom class of 40 students has come to Iowa for a week to take intensive English classes and stay with host families.

We had the pleasure of hosting two wonderful girls named Sakura and Mafuyu. We hosted students last year through this same program and it was such a great experience that we decided to do it again.

Hosting international visitors is one of my favorite things to do. I love sharing our home and our city with people from another country. Each year we host my friend Satoru from Japan for a week’s vacation (he’s been coming to Iowa every year since 2003, using his precious, rare days of vacation to fly 14 hours each way and stay with us – we are honored to have him each year).

Earlier in 2012 we hosted Daniel, a high school exchange student from Brazil, which was also a great experience. And now this year we’ve welcomed two new high school students from Yamanashi-ken.

Japan has a special place in my heart. I lived there for a year in 2001-2002, where I had my first job out of college teaching English in the Japanese public schools on the JET Program. It was one of the most influential years of my life and I’m glad to be able to keep up a connection with Japan as the years have gone by. 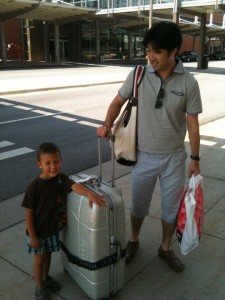 Satoru arrives in Des Moines for his 9th visit to Iowa

As time passes and I reflect back on my experiences in Japan, and on our experiences hosting these Japanese students, there are many things that continue to impress me more and more:

1. This Japanese high school sends an entire class to America for a week. The kids from Yamanashi are so mature and responsible and well-behaved! If you had sent a typical class from my (American) high school on a weeklong trip abroad, there would have been an international scandal. There would have been shoplifting and vandalism and teenage pregnancies. (OK, I’m exaggerating, but not by much – on my high school band trip to Orlando, several kids got caught shoplifting from Universal Studios.) It would have been a disaster – because  a lot of American kids just can’t handle the responsibility that goes with traveling overseas and representing their school and their country. And of course, I’ve taught in the Japanese public schools and I know that not all Japanese kids are polite and well-behaved; some of them are obnoxious and rude and immature. But both years participating in this program, I’ve been truly impressed by the way these kids from Yamanashi behave in a foreign country. They are a real credit to their school, their parents and their community.

2. The kids from Japan are interested in learning about other countries. They’re grateful to be here and appreciative of the opportunity. We asked the girls what they were most surprised to learn during their time in America, and they said that it was surprising to them that so many strangers said “hello” and were friendly to them. “In Japan, strangers don’t usually greet each other,” they said. “But in America, so many people said ‘Hi’ to us.” I told the girls that Iowa is unusually friendly by American standards, not that other parts of the country are rude, but if you go to a big city in the U.S. most people are too busy getting through their daily schedules, and they don’t always have time to talk and make conversation with people they don’t already know. It’s fun to hear even these basic observations from people seeing your home through new eyes.

3. The kids from Japan are very helpful and easy to have around. Both years we’ve done this program, the girls have been awesome guests – helping play with our kids, cooking dinner one night each week (last night they made Japanese beef curry and soba – two of my favorite dishes from Japan), and generally making daily life a lot nicer. It’s so much easier to deal with the daily needs of two kids under the age of 4 when you have some “big sisters” there to help keep the young ones entertained.

4. I believe that it’s important to help young people experience life in another country and culture. Living in Japan and traveling abroad have been some of my favorite and most influential learning experiences. You learn so much just by being in another country, surrounded by unfamiliar sights, learning a new language, learning how to navigate your daily life. You notice so many things and appreciate so many things about your home country and culture. It makes you a more tolerant, open-minded, well-rounded human being. I wish every young person could spend a year living and working in another country. I feel a sense of gratitude toward Japan for being a welcoming place for a young guy from America, back when I was just beginning to learn how to live on my own as an independent adult after college. I used to go to the grocery store after school each day and pack my groceries in a basket on my bike and ride up the hill to my apartment. Every weekend breakfast of successfully-prepared homemade scrambled eggs felt like a small triumph. I learned to walk into any ramen noodle shop in the city and order confidently in Japanese. I met new friends and stayed out drinking Asahi beer into the wee hours. My apartment had a tatami mat floor where I slept on a traditional style Japanese futon, and I slept very well, except for nights when there was an earthquake. (The walls would shake, slightly but noticeably, and I would hear the dishes rattling in the cupboards.) A friendly neighborhood housewife would see me walking to school in the morning and happily gave me a ride to school so I wouldn’t be late. (How many Americans would do this for a random foreign person walking down the street?) I got to know a whole circle of awesome Japanese friends through my friend Satoru and I got to see many amazing places in Tokyo that I never could have found on my own. I ate the best sushi I’ve ever had, right outside Tsukiji, the world-famous, world’s largest fish market in Tokyo. (In a year of living in Japan, I never once had a bad meal. You could spend your whole lifetime trying every restaurant in Tokyo and never be disappointed.) I got to climb the steps of ancient Shinto shrines and Buddhist temples. I got to see the old gravestones standing watch in the forest on the way to my school, containing the cremated remains of generations of ancestors. Living in another country gives you a new appreciation for the seasons, for colors, for food, for sensations, for time itself. I want to help other young people experience this same feeling, in whatever small way I can.

So I think we’re definitely going to keep signing up to host students like Sakura and Mafuyu. I feel a special connection with Japan and I want to help young Japanese people have a good experience in America, just like I had as a young person living in their country.

If anyone in the Des Moines area would like to participate as a host family for the Iowa-Yamanashi sister state program, please send me an e-mail at benjamin.gran@gmail.com and I can provide more details and put you in touch with the program organizers.