Cross-section of a Corn Dog

The Iowa State Fair is one of my favorite summer traditions. Every year my wife and I pack up the kids, crowd into a State Fair shuttle bus, and wander the fairgrounds stuffing our faces with grease, pork, cheese, ice cream, milkshakes, cookies, beef, breading and butterfat. It is a beautiful sight to see hordes of halter-top wearing women and mullet-sporting men crowding around the communal feeding troughs of the State Fair.

As a veteran fairgoer and dedicated year-round glutton, I’d like to share a few of my favorite State Fair eats:

You can’t go wrong with a State Fair corn dog. I usually buy one as soon as I set foot inside the Fairgrounds, just to start the visit off on the right track. Corn dogs, in case you’ve never had one, are hot dogs dipped in batter and fried on a stick. The batter is sweet and greasy, crunchy on the outside and mealy on the inside, like eating a hot dog wrapped in a pancake made of French fries. The best way to eat a corn dog is to slather the length of the dog with ketchup and mustard. If you manage to go home from the Iowa State Fair without ketchup and mustard stains all over your face, throat and chest, you’re doing it wrong.

BONUS GLUTTON TIP: Sometimes I like to eat one corn dog at the start of the day as an appetizer, before I eat my actual “meal,” and then I eat one more corn dog before we go home – kind of like dessert. 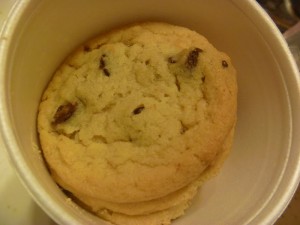 At the Varied Industries Building, there’s a restaurant that sells wonderful, freshly baked Toll House chocolate chip cookies. They bake them by the dozens and hundreds on vast silver sheets the size of aircraft carriers, each little cookie proudly arrayed in disciplined rows, ready to take flight into your mouth. Gazing upon these pristine rows of cookies is like gazing through the window of a hospital nursery full of newborn babies, except you want to eat the babies and smear their chocolatey innards all over your face, chest and throat. The Cup of Cookies includes approximately 20 cookies, all stacked at impossible angles. You WILL get chocolate all over yourself. You WILL get buttery greasy goodness all over your hands, face and pants. It’s OK. Just go with it. Revel in the buttery love. Your heart rate will elevate from the salty, fatty goodness of these warm, sweet, crisp-yet-soft cookies in a cup. Cookies in a cup! Who would’ve thunk it?

BONUS GLUTTON TIP: If a Cup of Cookies isn’t enough, you can also buy a Bucket of Cookies for like $10. But that just seems excessive, even for me.

If you only eat one milkshake per year (and my wife does, because she has a dairy allergy), make sure it’s the Peach Milkshake from Bauder Pharmacy (an old-time Des Moines pharmacy soda fountain-type place) at the Iowa State Fair. The Bauder Pharmacy peach milkshake is so delicious, it will make you overlook all of the less-than-admirable qualities of the state of Georgia (“the Peach State,” I think – whatever). It’s the taste of summer, poured into a tall plastic cup and served with a straw, although a more useful serving implement would be a trowel, because I want to spoon large spadefuls of this milkshake straight into my hungry gullet.

BONUS GLUTTON TIP: Bauder Pharmacy’s mobile ice cream serving station also dispenses tasty ice cream sandwiches, one of which involves Mocha flavored ice cream. One year, I ate a Peach Milkshake and then went back for a Mocha ice cream sandwich, and spent the rest of the weekend in a sudden-onset diabetic coma. (It was worth it.)

This is the sandwich served only in Iowa – a slab of pork tenderloin, pounded flat, batter-dipped and then fried, served on a bun with pickles, onions, ketchup and mustard. The breading is light, crispy and ever-so-slightly greasy. The pork is thin, juicy and flavorful. This is the sandwich that tempts Orthodox Jews and devout Muslims to abandon the faith of their forebears – and why not? It’s goddamn delicious.

BONUS GLUTTON TIP: Make sure to get a plentiful side order of fries or Onion Rings to go with your tenderloin. If not, you are a weakling and a coward and a failure.

The Iowa State Fair is home to an exotic cavalcade of Fried Things on Sticks, like a Fried Twinkie, Fried Pickle, Fried Oreo, and Fried Butter. (I made that last one up – I think. Who knows, it might actually exist.) I have never actually tried any of these Fried Things. Although I have eaten Fried Pickles before at my favorite brewpubs, so that one is probably OK.

There are lots of places at the Fair where you can buy freshly grilled Turkey Legs, roasted over an open flame. These are massive, meaty Turkey legs with loads of flesh hanging off of them – you can tear pieces off with your teeth and pretend you’re a caveman. It’s a primal experience to rip into piece of animal that still looks like the animal it came from – none of this civilized “ground turkey” or “turkey patties” – this is a real, honest to God LEG of an animal that used to be alive, and now you’re stuffing it into your hungry carnivorous maw. Just like Nature intended.

BONUS GLUTTON TIP: There’s not a lot of seafood at the Iowa State Fair (this is a landlocked state with massive amounts of beef, pork and poultry production), so eating a Tenderloin and a Turkey Leg is the closest State Fair equivalent of “surf and turf.”

I know, I know – I already sang the praises of the Bauder Pharmacy Peach Milkshake, and you really should try it – but in case one milkshake isn’t enough for your hunger, check out the A&E Dairy Barn, where you can see actual cows being milked to create the fixins for your chocolate, strawberry or vanilla milkshake. (Quick aside: How badass is it that humans have basically enslaved other animals and forced us to give them their milk? It’s like, “Yeah, cows – maybe you’d like to feed your young with that milk, but I have a hankering for a milkshake and a cheeseburger, so GIVE IT UP.”)

BONUS GLUTTON TIP: Is there anything better than a milkshake? If I ever got diagnosed with a dairy allergy/lactose intolerance/diabetes, I think I’d just keep enjoying milkshakes, and to hell with the consequences.

Avoid overpriced beer and soda and head for your nearest Lemonade stand. The Iowa State Fair is home to dozens of friendly, family-run lemonade stands that shake up a fresh glass of lemonade, with actual lemons and lemon pulp floating in it. Raise a glass of citrusy refreshment!

BONUS GLUTTON TIP: The Lemonade stands are usually conveniently located to ice cream/milkshake dispensaries, so you can get all your liquids in one place.

There are various cafeterias and Iowa Pork/Beef Association barns that serve pork ribs, pulled pork sandwiches, loose meat sandwiches, and other Fairground favorites, but I don’t usually eat there because I’m too busy stuffing my face with things on sticks that have been batter-dipped and fried in vats of grease.

BONUS GLUTTON TIP: Did you know that Iowa is home to a Pork Queen? Is this the greatest state in America, or what?

There’s this one place, right next to the Giant Slide, that sells Watermelon in a cup for $2. It’s amazing. I don’t know why, but somehow watermelon tastes even more delicious after you’ve just consumed 4,000 calories worth of grease, pork fat, butter and salt. The guys who work at the watermelon stand are out there chopping up watermelons all day long – two and three melons at a time – and it’s mesmerizing to stand there and watch them effortlessly strip away the melon rinds with a few deft strokes of their carving knives. It’s like watching samurai swordsmen, or master shipbuilders carving a massive tree trunk into a main mast. With just a few simple strokes of the knife blade, they transform a massive melon into a tasty, fleshy pile of diced pink fruit, ready to apportion into plastic cups (or buckets – I think they serve the watermelon in “Bucket” sizes as well). So anyway, get some watermelon, because its high water content will help to counteract the effects of the 5,000 milligrams of sodium you just consumed today.