I am part of the cast of “The Beebo Brinker Chronicles,” a play being produced by StageWest Theatre Company in Des Moines, Iowa. Opening night is February 18, 2011. 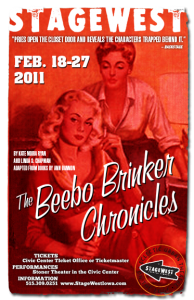 It’s been a long time since I’ve acted in a play. The last time was when I was a junior at Rice University in spring of 2000, and I was in a Rice Players production of “A Man For All Seasons.”

I’ve been thinking off and on about trying out for another play during the past few years, but I never got around to it. Finally last November I decided to audition for “Beebo Brinker Chronicles,” and I got a part!

I was thinking about some of the things I missed about acting, and why acting is important.

Tickets are on sale now for “The Beebo Brinker Chronicles” at the Des Moines Civic Center’s Stoner Theater!